On Friday 23rd january 2015 two of the brewery owners, Stephen George and Craig Fermoy, attended The Cantley Cock public house to meet up with the members of the brewerys’ pricipal charity, the Freethorpe First Responders.
At this meeting it was their huge pleasure to present the charity with a cheque from the brewery for the sum of £2047.44.
This was money raised by the brewery over the previous year and included donations from the Humpty Dumpty 10K last June, the Reedham Beer Festival last July and the brewery’s popular Christmas Open Weekend last December, which raised more than £1000.
The brewerys’ thanks to all of you that have supported any of these events and contributed to this very worthy and hard working charity. 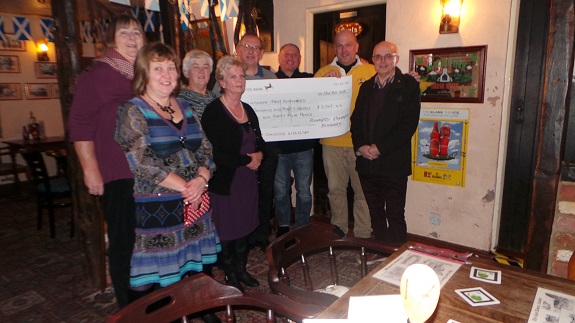 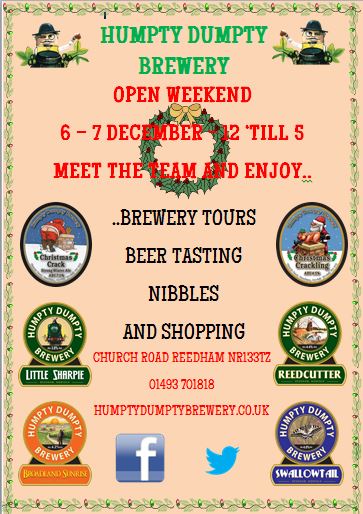 Sleepytime Gal is this year’s Festival Special, brewed to coincide with and launch at the Norwich beer festival as well as being available at good pubs thoughout the region. 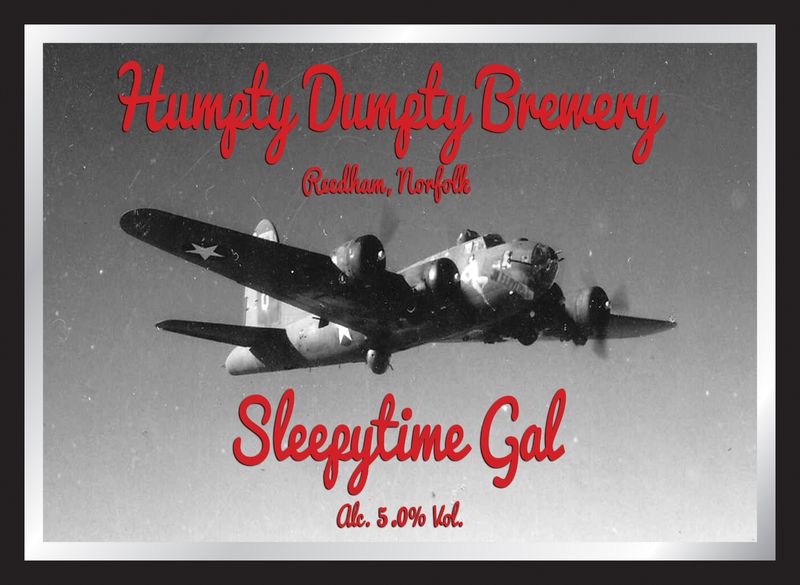 THE STORY BEHIND THE BEER

On February 21st 1944, Sleepytime Gal was one of a large number of American B17 bombers returning from a raid over Germany when it was involved in a collision with another B17 in the fog over East Anglia. Unfortunately, as a result of this collision both planes were lost, crashing into the marshes near Reedham, with the crews of both planes killed.
Sleepytime Gal is, in this 70th anniversary year, named to honour and remember the brave men on both of these planes who gave their lives in the name of freedom.

There is a plaque in Reedham commemorating the crews of these two planes, alongside the village war memorial. In 1999 there was a Channel 4 Time Team programme, with Tony Robinson, where the site of the crash was excavated. It can be watched on 4OD. 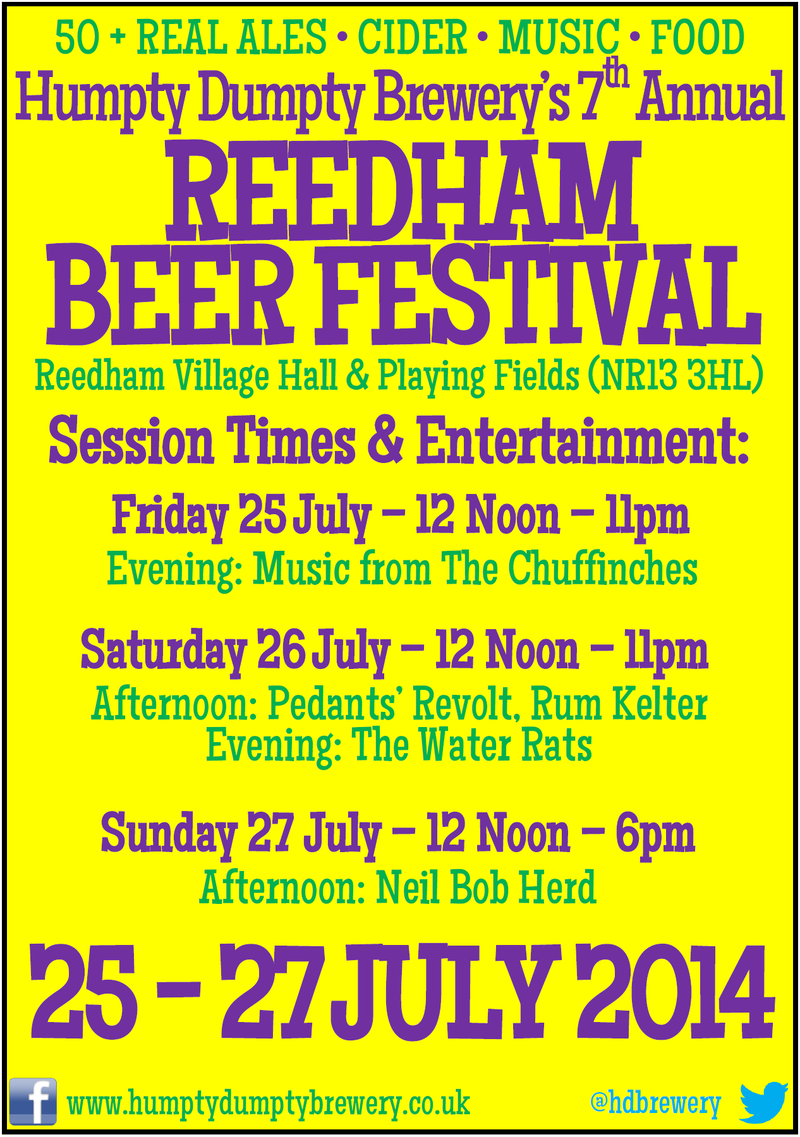 We’re looking forward to three days of great beer, fantastic music and (hopefully) some good weather. As with last year, this year’s beer festival will start at 12 Noon on Friday

After collecting our award last week for our Red Mill, we had to go out and find a pint of it. Our award winning Red Mill is red in colour, with a crisp hoppy bitterness on top of a caramel and fruit malt backbone. 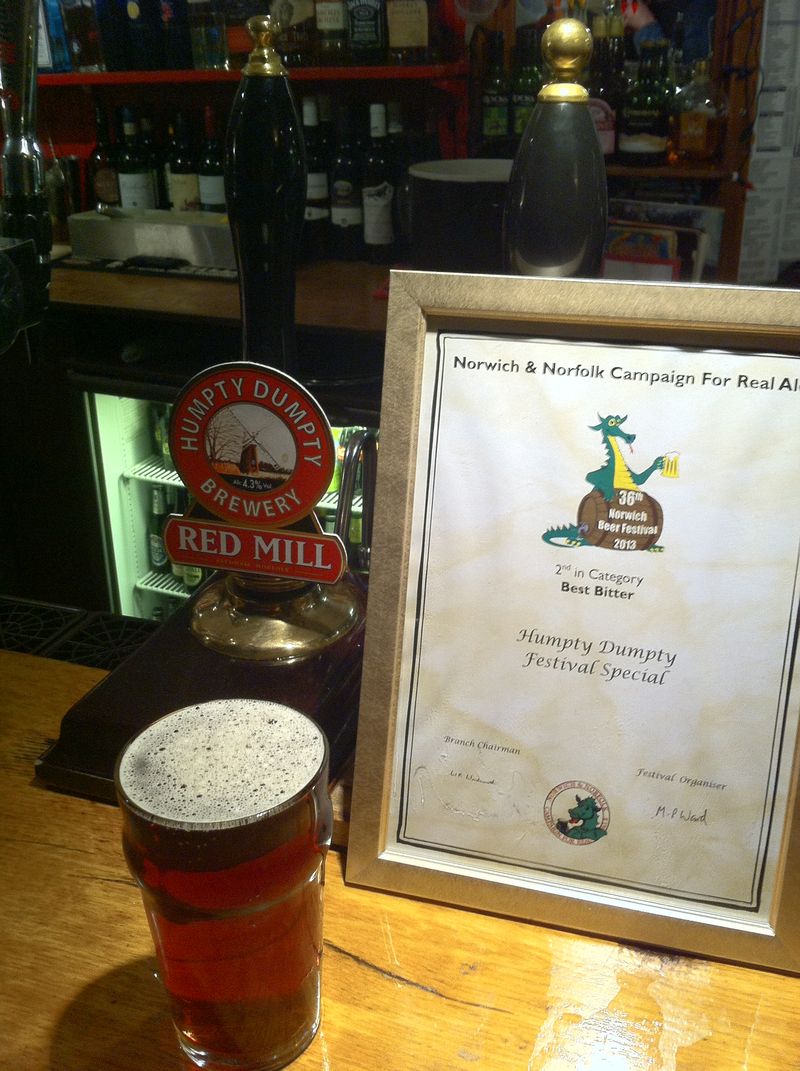 Our bottled beers have once again been recognised for their quality and consistency by the Norwich & Norfolk Campaign for Real Ale.
Our Broadland Sunrise 4.2% was named the overall winner of the competition and is the 2013 Champion Bottled Beer of Norfolk as well as being awarded the winner of the Bitter Category. 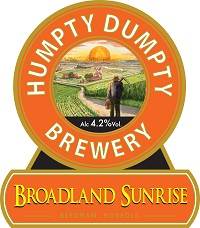 “15” 9.0% our Anniversary Barley Wine was entered into the Barley Wine category where it took the top prize, the judges commenting that it was “rich and satisfying with banana toffee overtones”. 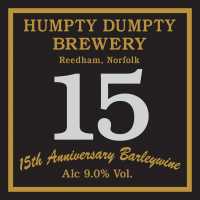 Norfolk Nectar 4.6% was awarded Bronze in the Speciality Beer Category. 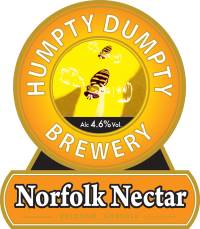 Broadland Sunrise is always readily available in cask, and will be available in bottles towards the end of February.

Our new beer Red Mill, a 4.3% red ale has been awarded a Silver Medal in the Best Bitter category at the 2013 Norwich Beer Festival where it was branded as “Festival Special”.
A big thank you to all of you at the festival who voted for our Red Mill. The second brew of which will be available next week (11th November). 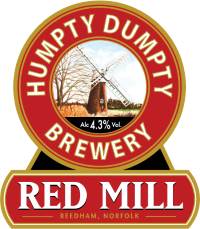 We are very please to have collected our certificate from the Norwich Beer Festival last week for our Little Sharpie 3.8%, which has been awarded the 2013 Norfolk Beer of the Year in the Bitter Category. 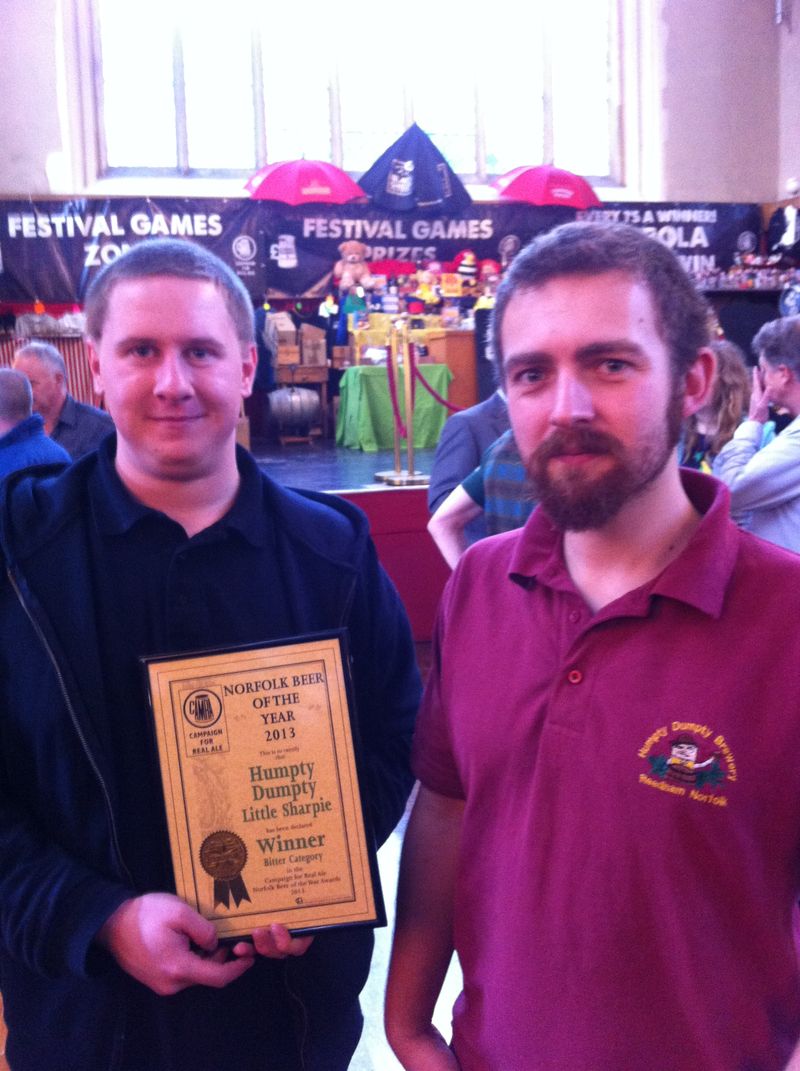 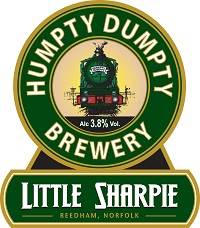 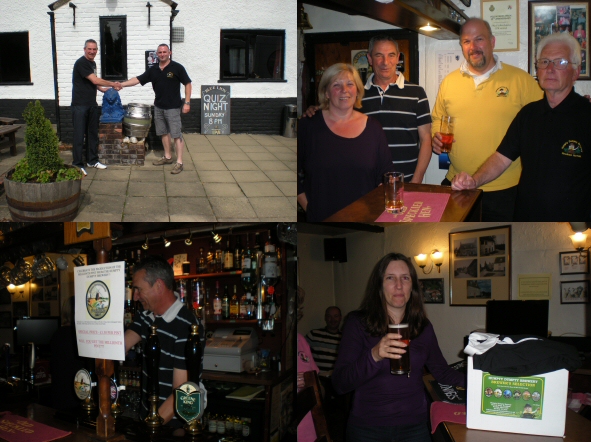 We are pleased to announce that the one millionth pint of Humpty Dumpty Brewery ale was sold last night at the Blue Lion in North Pickenham, Norfolk.  Lucky customer Lara Bolen ordered the pint of Reedcutter about 9PM from landlord Mick Lee and was greeted by Lesley, Stephen and Jimmy from the brewery.  Lara received a “Brewer’s Selection” mixed case of Humpty Dumpty beers and a rugby shirt for buying the millionth pint.  She said that she was a fan of our beers and was delighted to win the prize, which included a bottle of her favourite, Bad Egg.
We worked out the millionth pint on the basis of our duty records going back to the start of our current partnership operation in September 2006.  We’ve had a countdown in the brewery for the past few weeks and finally reached the milestone early last week when Mick ordered the designated firkin of Reedcutter. Although the Blue Lion’s buying our millionth pint was completely by chance, Mick pointed out that he has been one of our oldest and most regular customers.  He checked his records and found that he had our 57th invoice back in late 2006 and had ordered a firkin of Reedcutter on that occasion as well.
We were delighted to spend the evening participating in the pub quiz in the friendly company of Mick and Caron and the customers at the Blue Lion, and we’re very pleased that the millionth pint went to Lara.

We had a great bit of news from Norwich & Norfolk CAMRA last night.  Our Broadland Sunrise (4.2%) was voted Champion Beer of Norfolk 2010!  We are very partial to this beer, which is brewed with a combination of pale and crystal rye to liven it up and give it its sunrise-orange hue.  The judges pronounced it “Beautifully smooth with a swirling malt, hop, and fruit aroma.”
We’ve recently adopted this pumpclip for our new brewery and van livery and so are delighted for this enthusiastic recognition from the folks at CAMRA.
In addition to being named overall Champion, Broadland Sunrise was voted best Best Bitter.  Our Railway Sleeper (5.0%) was voted best Strong Bitter and Norfolk Nectar (4.6%), our beer brewed with local honey from Reedham, was voted best Speciality Beer.  What a great and unexpected set of honours for our efforts.  We are very chuffed. 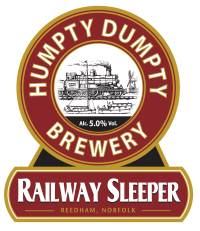 We also congratulate our colleagues at Grain, Wolf, Chalk Hill, Elmtree and Norfolk Square breweries for their success in the other judging categories. This really demonstrates the quality that Norfolk’s microbreweries are delivering today.  If you have a choice, give us a look in.  If you don’t, ask your landlord for one – it’s time we do away with the beer tie and give consumers what they want at a price that’s fair to the publican.
Now, we’d better get brewing!

Have we got a treat for you at the Brewery Shop this weekend! Champion Beer of Norfolk Big Sharpie & our stylish Czech cask pilsner Lezak both on draught. Open 12-5pm every day, lots of other #champions & #treats to be found in the shop - come & see for yourself! #norfolk #realale #shoplocal #norfolkbroads #beerstagram #beerbeerbeer #cheers 🍻🍻 ... See MoreSee Less
View on Facebook
· Share

When this happens, it's usually because the owner only shared it with a small group of people or changed who can see it, or it's been deleted.
View on Facebook
· Share